Welcome to the Three Crowns, Chagford

Welcome to the Three Crowns, a beautiful, part-thatched 5-star inn set in the heart of the pretty Dartmoor town of Chagford.

Behind its imposing granite facade, the Three Crowns is a magical mix of 13th century features and contemporary comfort and style. From beamed ceiling and huge inglenook fireplaces, to a glass atrium and stunning courtyard garden, the Three Crowns is a delightful place to enjoy great food and a comfortable stay.

We offer a delicious menu featuring fresh, local seasonal produce, cooked to order by our talented team. We also offer an extensive wine list and a great selection of soft drinks. We have a policy of ‘keeping it local’ and use local ingredients in our dishes and stock local wines and juices. Whether you choose to eat in the cosy, traditional front bar with its log fire and mullioned windows or the stunning light and open glass atrium we are sure you will enjoy your meal.

The Three Crowns has 21 en-suite boutique bedrooms refurbished to a high standard and successfully blending character with modern design and convenience. In each bedroom, you will find a contemporary en-suite, a divinely comfortable Vi-Spring bed, flat-screen TV, internet connectivity, bottled water, bathrobes and i-pod docking stations.

FREE wireless internet access is available throughout the Three Crowns.

We offer a delicious menu featuring fresh, local seasonal produce, cooked to order by our talented team. We have a policy of ‘keeping it local’ and use fabulous local ingredients in our dishes.

We offer an extensive wine list and a great selection of soft drinks. We have a policy of ‘keeping it local’ and stock local wines, ciders and non-alcoholic drinks.

The Three Crowns has 21 en-suite boutique bedrooms refurbished to a high standard and successfully blending character with modern design and convenience. We have six dog-friendly rooms all with direct access to our external courtyard.

You can book online here, or call us direct on 01647 433444, where we will be happy to discuss your requirements and offer you our best rates. 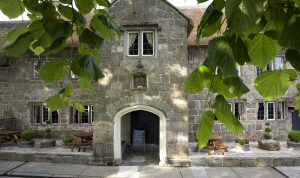 The Three Crowns, once an old manor house belonging to Sir John Whyddon, was described by famous clergyman and writer, Charles Kingsley, as ‘a beautiful old mullioned and gabled perpendicular inn’ and in 1952 was registered as a building of historical and architectural interest.

Built of Dartmoor granite in the thirteenth century, the Three Crowns retains a wonderful sense of history, with its great open fireplaces and fine oak beams still in their original state of preservation.

It was in the unusual stone porch that young Sidney Godolphin, aged 32, Cavalier and poet, and described as ‘one of the four wheels of Charles 1sts wain,’ was killed during a skirmish with the Roundheads in 1642. He died on one of the stone seats in the sides of the porch.

Chagford is one of four medieval Stannary towns on Dartmoor, situated high above the River Teign. The name of Chagford means ‘gorse ford’ from the old dialect word chag (gorse, broom), and the ford being that over the River Teign which is crossed by Chagford Bridge and has existed since before 1224.

Chagford had developed as a market centre for the wide moorland areas as early as the 12th Century. In 1305 it was made a Stannary town where tinners had to bring their metal for coinage. The Stannary brought prosperity to Chagford, which later became an important woollen centre. This dwindled in time and, in the early 20th century, Chagford grew again as a holiday and residential town for those who thrive on moorland air.

Sitting opposite The Three Crowns is the church of St Michael of Archangel, a fine example of a 15th Century granite church with parts dating back to the 13th Century.

If you’d like to take yourself on a guided tour, The Chagford History Society has produced a Town Trail, sponsored by the Three Crowns, that you can download here or pick up a copy from Reception.

You are welcome to bring your four-legged friends with you – well-behaved dogs on leads are welcome in the bar, snug and external dining areas. Assistance dogs are welcomed throughout the building.

Within the restraints of this ancient grade II listed building, we try to ensure that the Three Crowns is as accessible as possible. Accessibility Guide. Parking spaces are limited and are reserved for Superior Rooms and the Godolphin Suite, with further parking on a first come first served basis. There is plenty of on-street parking in Chagford and a very reasonably priced ‘pay and display’ car park only 50 metres away.

At Three Crowns, we are committed to running a modern and sustainable business within the confines of a grade II listed building. Things we do to minimise our impact on our environment include purchasing as much as we can from companies based in Devon and Cornwall, ensuring that our spend creates employment for other local businesses.

We value your feedback. It would be really helpful if you could take a moment to give us your comments. Click the icon above to complete our customer feedback form.

Take a look around