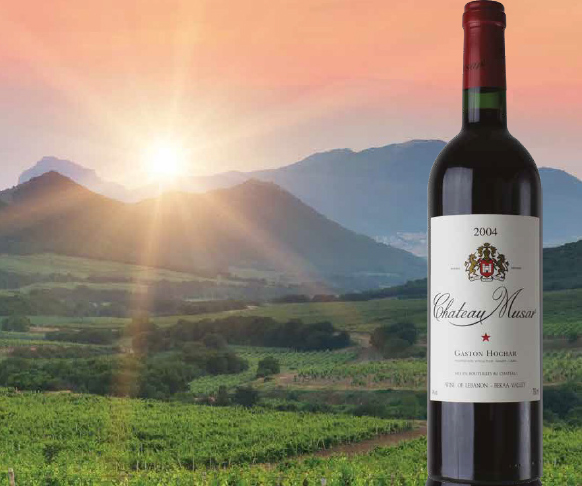 If asked to name wine producing regions, it’s unlikely that many people would say The Lebanon. With the terrible troubles in Syria, you would be forgiven for thinking that the country’s wineries had disappeared into the desert. In fact, they are thriving despite the wine growers risking life and limb to grow and harvest the grapes.

Lebanon is firmly staking its place amongst the wine firmament. Château Musar’s red is still Lebanon’s most celebrated wine described by many as one of the great wines of the world; a gamey blend of Cabernet, Cinsault and Carignan, and the 2004 vintage is one of the best.

The wines of Château Musar are unique expressions from a country with an ancient wine-making culture, as wines have been cultivated from Lebanon’s high altitude Bekaa Valley for over 6000 years. French in origin, the Hochar family arrived in Lebanon in the 12th century, ‘Preux Chevaliers’ and have remained there ever since. Château Musar’s red vineyards are situated towards the southern end of the Bekaa Valley, at relatively high altitudes and have the kind of calcareous, gravel and stone soils that encourage the production of high-quality grapes. The grapes used to make the red wine are Cabernet Sauvignon and Southern Rhône varieties of Cinsault and Carignan from long established mature wines yielding a maximum of 30 to 35 hectolitres per hectare.

You can try this excellent wine as we stock Château Musar Bekaa Valley, Lebanon 2004 in our Wine List. It is a fine Haut-Médoc château wine in the Lebanese desert, where it takes on a herbs-and-baked-earth overtone to the sweet ripe fruit and sinewy vivid palate. Scents of fine leather, cigar box and dried orange peel amplify the flavour profile. 14% vol. Bottle £40.00

Despite their close proximity to the front line during the Civil War, Château Musar amazingly lost only two vintages during the fighting!

Celebrate Christmas at the Three Crowns
24th September 2019
Book a room
Book a table
Special Offers
News
Blog
By submitting the form above you are opting in to receive our Newsletter. Your data will never be shared with another organisation and you can opt-out at any time. For more information please read our privacy policy.
Go to Top